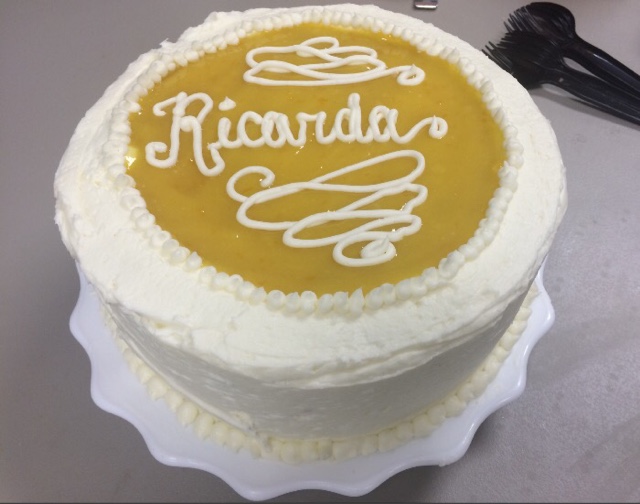 Okay, so I'm not going in chronological order in the book, American Cake. I don't know if that's a fool's errand, but I'm finding it hard to do.

What had happened was the next cake is Angel Food Cake. Which I critically failed at making. It was a woeful disaster and I will attempt it again. However, it did leave me with 11 egg yolks. Yolks often mean curd for me, so I made the lemon curd recipe out of the Cake Bible. (I expect Anne knows Rose and they are great friends.)  I tripled the recipe, because you know I had all the yolks.

Plus it was Ricarda's birthday and she wanted a cake with buttercream icing. I had lemon filling so I flipped through Anne's book until I found something. That something is the Hot Milk Sponge Cake.

Overall it was generally satisfying but I've made easier to bake sponge cakes that were less dry. I'm disinclined to even type out the recipe, because you should just keep looking for a different sponge cake recipe. I'm going to call this one done, post a picture and be finished.

I didn't even have the heart to photograph the failed Angel Food. It's been a tough week. :(  The lemon curd was spot on though. :)
American Cake Anne Byrn buttercream frosting lemon curd rose levy bernabaum Sponge