September 22, 2013
September is a busy birthday month in my family. We aren't a large family by most measures so it's rare if there are two birthdays in a month. September has three! And that doesn't include my brother's girlfriend's son...so by extension there are 4!

My daughter splits the difference between my mother and father's birthdays. When we decided to do a blended party I asked daughter what kind of cake she'd like; the old folks could care less about the type of cake. Daughter however loves making decisions. She's obviously a Virgo, not a Libra. I kid, really she's soon to be twelve and that's bigger factor than her zodiac sign about her desire to be boss.

She wanted chocolate cake with coconut frosting! That excites me more than you might imagine. Her pallet is doesn't shoot much further than chocolate with chocolate. I was delighted with the idea of two happy flavors!

I love multiple layered cakes but find splitting round layers a chore and baking many skinny layers even more tiresome. I'm certainly okay with making a cake in a jellyroll pan and cutting layers, but a rectangle cake isn't always what a girl wants to serve. Birthday cakes are round after all, right? Imagine how giddy I was when I saw the idea of cutting a jellyroll cake into strips and building the cake layers on their side in a spiral! No layer splitting, one pan, round cake, and a thrilling up and down stripe which is completely unexpected when you cut into the cake!
﻿﻿


I just scanned my text and noticed that every paragraph ends in an exclamation point. Oh my. I suppose I'm pretty excited. I'll simmer down and share the recipe.

This is an old school Genoise with a simple syrup and a cooked frosting.

Combine the eggs and sugar in the mixing bowl, heat over a water bath until they are lukewarm. Stir occasionally. They should be bright yellow. Beat at high speed for 5 minutes. Scrape regularly. Beat until it looks like whipped cream.
Sift the flour and cocoa together. Fold the mixture into the eggs a bit at a time. Add the butter and vanilla. Be careful not to over mix. Pour into prepared pan and bake 25 minutes or until it's lightly springy when touched. Cut the edges away from the sides of the pan.
If you wish, sprinkle the cake with powdered sugar and a tea towel while it cools.

Combine in a pot and simmer on the stove until the sugar is dissolved. Cool.

In a sauce pan add the coconut milk, flour and salt. Stir with a whisk and heat, scrapping the sides of the pan. Cook until you have a thick paste. Cover directly with cling wrap and cool. About an hour.

Cream sugar, butter and vanilla together until the crystals are dissolved and it's fluffy. Add the flour mixture and whip one minute more. The coconut milk will make the frosting an off white color. Add a tint or cover the cake in flaked coconut.

Unroll the cake and brush it with simple syrup. Cut the cake into equal width strips. Frost the first strip while it is still flat. Roll up and brush the under side as you roll with simple syrup. Set on cake plate. Frost the outside of the roll. Lift the second strip of cake. Carefully wrap the frosted cake with the 2nd strip. You will have syrup and frost a few inches of cake because the 2 strip is longer than circumference of the first strip. This is tricky but Genoise is sturdier than your typical box cake. Syrup and frost all exposed parts of strip 2. Pick up strip three and wrap it around 2. The two ends should meet. Gently, squeeze the cake together. Syrup and frost the sides and top. Press shredded coconut into the cake. 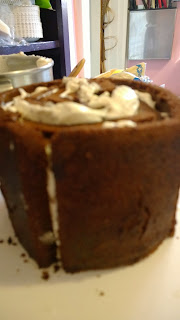 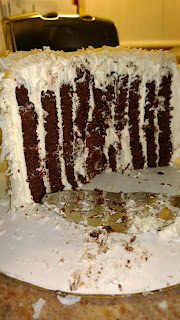